A Sussex Adventure and Sweet Chavender

Our eagerly awaited jaunt to the edge of the Sussex Downs could not have come sooner..........de-humidifiers left on warp speed for two weeks would do our lovely home the world of good and on locking the door we could at least try to forget the torment of recent weeks.

I know little of Sussex - I have friends who live and fish there and I've been beguiled by a friends story of how he completed the South Downs Way and other than a Sherlock Holmes story of a Sussex Vampyre it has passed me by. It's always been on my list of places to investigate though.

The two weeks flew by, almost as quickly as our de-humidifiers, and fishing was never far from my mind - for me as an angler not to have cast a line for anything since the glorious 16th of June was torture. Plans were hatched to at least wet a line on my return home, so I contented myself with taking in the sun, drinking the local ale and drinking the words of John Gierach. My pals Fennel and Demus had both gifted me Gierach books in recent times and I'm ashamed to say they had not been reached in my reading pile so in honour of them both I fast tracked them to top o' pile.

There must have been some sort of harmonic convergence going on as by the end of the first week I still hadn't found a corker of a beer or a corker of a pub - these are the must haves for me on an adventure...........I had found a nice little bottled ale, very pleasant lightly chilled at the beach (Arundel Brewery Sussex Gold), but it was just alright, something was missing. I remember having a chat with Bernard Venables about how we would both spend hours driving around on family trips trying to find the right pub and the right beer.......many would be rejected to the amazement of passengers and this is what I am like too, it has to be just right, one element out of place and it's no good. I know some of my other friends do this too, so it can't just be me.

Then it happened, we had returned from the beach and my phone rang, it was Ferneyhough to see how things were - "you must try the Black Horse at Byworth" he said. "It's just your cup of tea, I wrote about it in Casting at The Sun and I think we even had a Golden Scale bash or two there in the 80's before you joined, give it a go, it may be just what you are after" - it was. Flowerpots, Andwells and Langhams brew ale that could have been made by the fairies as I had never heard of them, I soon became well acquainted.

I had made great plans to visit all sorts of places, drag the children to far flung corners of the downs, take in Ravilious vistas and generally arse about but all we did and all we needed to do was recharge and this we did mainly on the beach which was alright by me. Perhaps another time.

So, I am pleased to say that since returning home life is slowly returning to some sort of normality..............I have actually been fishing and after such an enforced sabbatical it would always be my bolt hole that is the Avon that won the toss for the venue.

Scalding temperatures meant evening would be my best bet, but after so long on the sidelines I actually arrived as mist was whorling off the meadows and river. A secret nook by a small sallow bush which is known to contain a monster or two was where I layed my jacket as a seat and dropped a huge lobworm into the slow river just my side of the crease. I could see chub, barbel and bream and I really did not care who was hungry for my bait and rather fittingly it was a glorious chub that was first to oblige. I adore Avon chub. Then two Avon bream followed of around 6-7lbs each - now I have never been a fan of bream since a week in Ireland as a schoolboy in the back of a mini-bus with the rest of the school angling society. Coupled with the stench of a weeks bream slime from bream bashing on the Shannon to keep us company and the vomit from six unwashed twelve year old schoolboys high on bream you may understand where this prejudice came from. 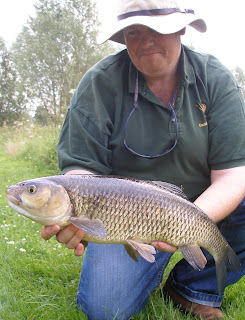 I put the two splendid bream down to my lucky vintage Portmeirion bream tea mug, it always brings me some sort of luck on the Avon. I had a few more chub before going down with barbel fever and duly caught nothing more. I should have listened to my rational self - ignore those double figure barbel that keep ghosting in over your bait, you don't need one today - enjoy the moment and if one comes along then thank him most profusely. Barbel fever kicked in and it served me right that they were too canny for me. 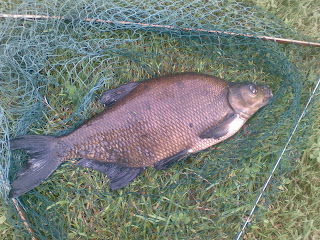 As night fell I was more than happy with my lot -  time is a great healer and I do now actually like bream - well, Avon bream. They do seem a bit different........less slimy!