I know, I know it's not fair having the same band twice so recently, but tough. I'm enjoying going through my Who back catalogue and this one fits the mood with these ever so slightly nippy mornings.


Posted by Dickie Straker at 07:52 No comments: 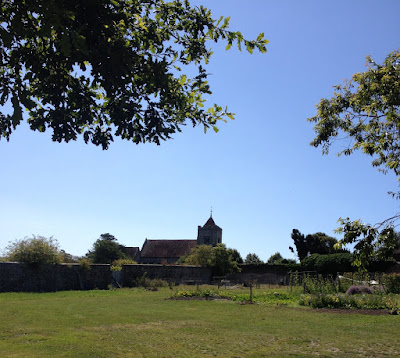 Friend Demus and I were joined at our table at the busy Ram Inn at Firle by a couple walking the South Downs. As we sipped our pints of Harveys Ale they asked "are you walking the Downs?" - "no, I replied. We are looking for a greenhouse". It was only then that I thought how ludicrous that may sound, but it was true and they totally understood what brought us to this corner of rural Sussex. You see, we were not looking for any greenhouse, but the greenhouses of Eric Ravilious. He painted the wonderful greenhouses belonging to the Gage family in 1935 and we have spoken of them often and viewed his paintings in the flesh, so as you can imagine this was an exciting jolly on a warm and sunny August day.

I have visited Firle before, I love it in fact. The Church, houses, Jim Piper's vegetable stall, Bloomsbury connections and also the pub with its excellent menu and beer - everything seems right with the world.

The most famous of ER's greenhouse paintings is the one directly below (Cyclamen and Tomatoes 1935). He also did The Cucumber House around the same period.


We finished lunch and as if by magic we bumped into Jim Piper. A lovely Sussex chap who maintains and grows vegetables in the very greenhouses that ER painted. Jim also understood by the way why we wanted to see them - he was that sort of chap, he just got it. Generous with his time and patient with two individuals resembling schoolboys who enjoyed the simple things of life. He also showed us the Victorian strawberry house. 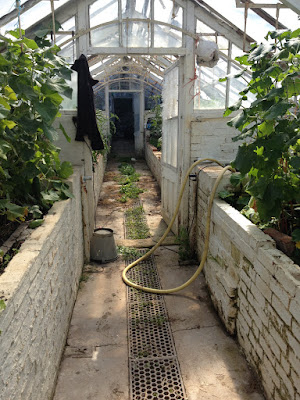 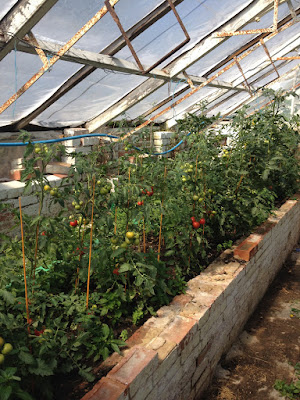 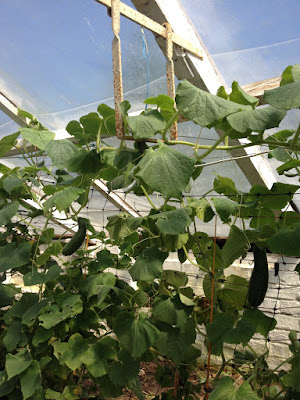 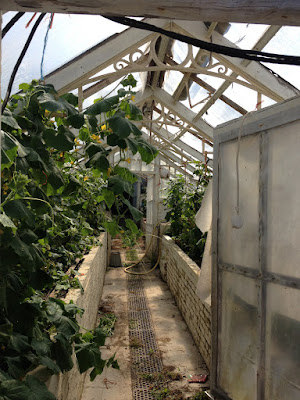 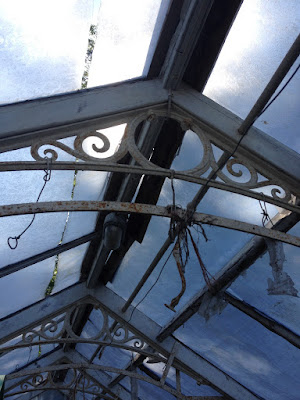 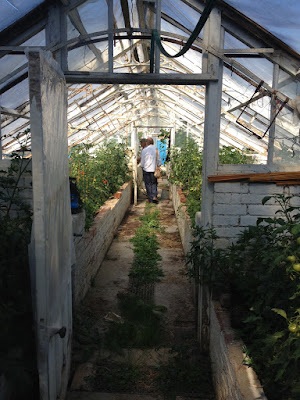 I loved the ironwork - what stories those drainage grills in the floor could tell. The nine or so gardeners from the estate who went to war and only three returned. Mr William Edwyn Humphreys was the head gardener when ER visited to paint in 1935. He was one of the three who returned. Jim showed us a lovely photograph of them all together in the garden. Mr Humphreys is buried under the Yew in Firle churchyard. Just over the wall from the gardens he managed.

I purchased some tomatoes and a cucumber grown in the very ER greenhouse. They were out of this world. The tomatoes sliced on toast with salt and pepper - perfection! 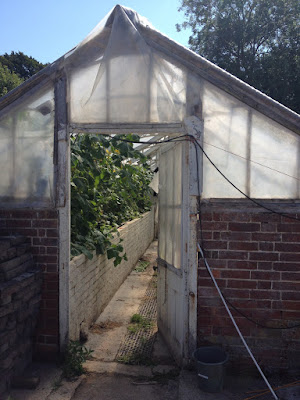 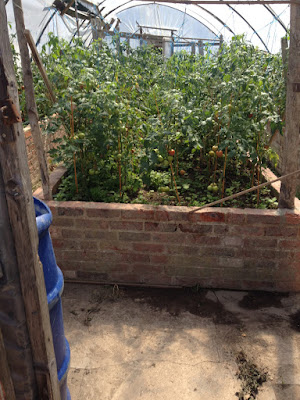 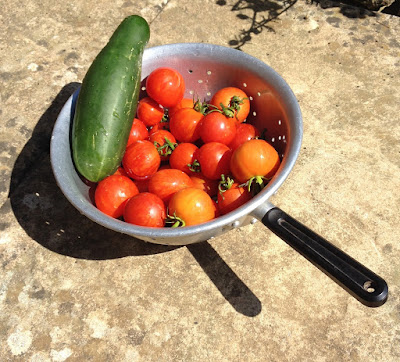 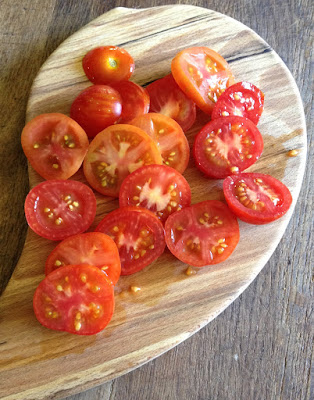 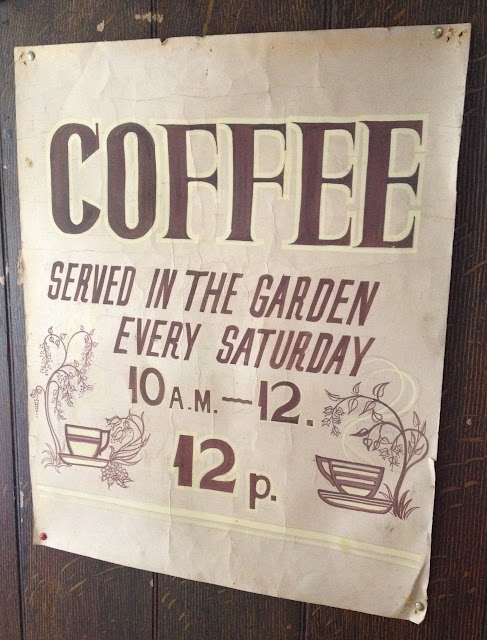 This delightful and atmospheric short film was filmed here, where I live and walk - it really does capture my almost obsessional passion for the deep lanes in this part of West Dorset. Filmed by Adam Scovell (Celluloid Wicker Man) and narrated by the ever present Robert Macfarlane.


Posted by Dickie Straker at 08:05 No comments:

A run on reading matter over the last few weeks - as per usual, the most expensive for the cost of a pint (and not your inflated London pints at that!). The norm is around a pound or two, sometimes less.

All of these were found in the book town of Hay on Wye in the cheaper less frequented back passages and nooks on our recent holiday jaunt. I was particularly pleased with Going Fishing (letters to a brother angler - 1925 Arrowsmith). I cannot speak highly enough of this book and to find two copies in one day is quite something. I was only recently recommended the book after leafing through friend Ferney's copy and took an instant liking to it. Some things are meant to be. Such lovely chapters as: A Norfolk Mill Pool, My Favourite Spot, Winter Roach, Catching and Cooking, Two Chubs and Another, The Verb to Stret-Peg, A Hint and some Animadversions, The Sixteenth, Sultry Days. The list of enticing chapters goes on and it is a superb read.

I have no intention of ever going trout fishing in the streams of Natal (signed presentation copy from the author Neville Nuttall), but who could resist a book with such a splendid jacket for £2? Not I. 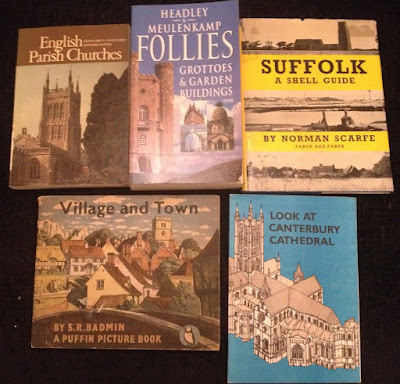 England Parish Churches by Edwin Smith and Olive Cook just continues to fuel my passion for the country church and a superb guide to Canterbury Cathedral by Rena Gardiner for 50p. You can do no wrong with a Puffin Picture Book, especially if SR Badmin is involved and I need not tell you what a delight Follies, Grottos and Garden Buildings is.........splendid!
Posted by Dickie Straker at 08:02 2 comments: 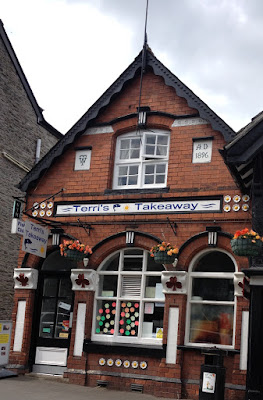 What is there not to like about Terri's Takeaway in the delightful market town of Hay on Wye? I don't know what it was before it served treats to the masses on a Friday night with a full on attack of the beer munchies but what a delightful looking shop front. The flowers which adorn it look like fried eggs ready to be burst by the toast. The corbels are just as lovely. 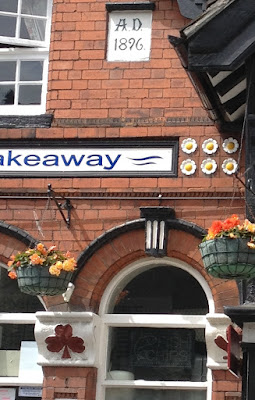 The furniture below, which was spotted just by chance, is fitted to a wonderful azure blue door surround. Not sure what Jones the Mercer did though - cloth merchant perhaps?

Hay is full of architectural treats. The glazed animalier tiles that adorn the facade on Booth's bookshop are a wonder to behold. Far too much to take in as so much time has been spent browsing and looking for treats of the bookish kind. The bargains that could be found in Hay in years gone by are few and far between these days. The dealers are fully tuned in to the Internet - unlike my first visits in the late 1980's. I did find some gems this time around though and right under the noses of the hardened dealers.........more of this in a later post. 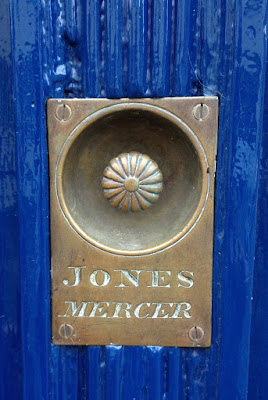 A delightful sign to finish - well it made me chuckle anyway and one to add to my long list of corkers that make me laugh, the Captain blush and the nippers wonder what an earth is going on! 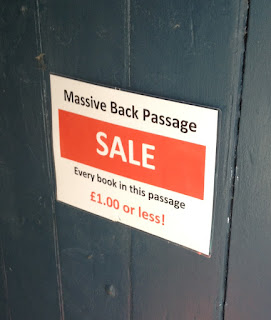 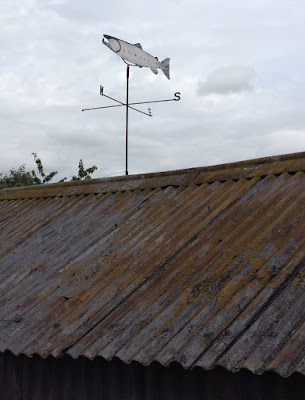 Not only do I bring you a rather fine looking vane in my occasional series of such items but a little bit of corrugated too. Deep joy! This splendid sight is beside the River Wye of course.
Posted by Dickie Straker at 10:34 No comments:

I can see for miles and miles 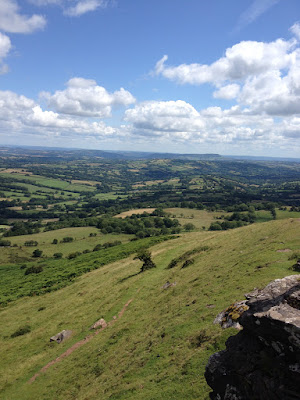 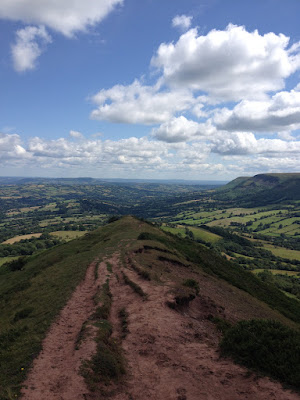 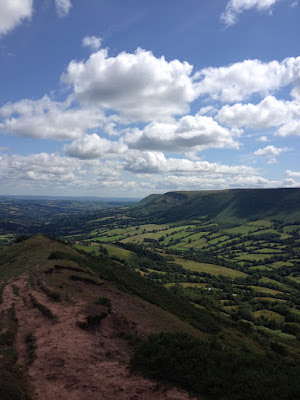 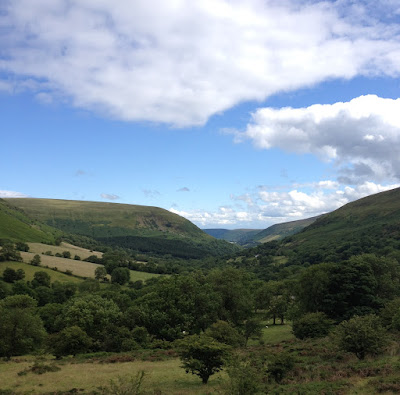 
We haven't had a Friday Ditty for an age, so here we are with one for the holiday season. I can't seem to get this one out of my head at the moment - probably due to the landscape I am currently relaxing in.
Posted by Dickie Straker at 06:20 No comments: 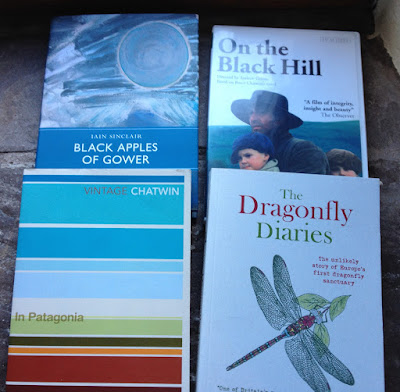 I always have a healthy reading pile on the go. During the holiday season I do try to keep it realistic, so here it is for this holiday period. I also include a film which will be viewed at some time as, this year, we have not migrated east to our usual haunt of the North Norfolk coast. We are in the shadow of Black Hill - made famous in that most superb book by Bruce Chatwin. So, as you can see, the film of the book is essential viewing as I have not seen it for many a year.

Little Toller Books continue to release every book I have ever dreamt of........I don't know how they do it, but they are utterly brilliant. I thought it would be nice if someone published a book on mermaids - they did it! A book on Rena Gardiner I thought would be rather fine - they did it! The list goes on, but for the next week or so I am looking forward to reading Black Apples of Gower along with the other titles you see above. Happy holidays!
Posted by Dickie Straker at 10:14 2 comments: