Even more go fishing by train, tube, bus or tram!

The edge of everything

I don't know how I missed this delightful BBC4 series which was broadcast back in March. One of the episodes was with an artist who I admire greatly. Norman Ackroyd has always been an inspiration and when I need a slice of St Kilda it is usually to his monochrome etchings that I head for my fix.


He has a wonderful talent which takes me there right then and right now with my own soundtrack of gull and sea. I am heading to Cape Wrath and St Kilda next year and I guess part of the reason for my fascination with these extremities is down to the art of Norman Ackroyd. It has always added to the mystique and enhanced my enjoyment of these places and so many others.


I especially like the way Norman pronounces archipelago! Splendid stuff.
Posted by Dickie Straker at 10:04 No comments:

I don't normally post on a Saturday - either watching footy, listening to footy or fishing! With it being a quiet day on all those fronts I thought you would enjoy this little gem from the 1950's.

I am a football traditionalist and it hurts a great deal at the moment being a Cardiff City supporter - off the field eccentricities have been the focus when we should be celebrating one of the greatest periods in our clubs history. The fans know we will always be blue. We play Manchester Utd tomorrow for the first time since 1974 - we should be in blue and them in red - how times change.

I crave for the simple days of Ninian Park and pipe smoke, the smell of warm Peter's Pies from the Bob Bank kiosk and the pre-match build up that sometimes involved wading through the fug in the Bluebird Club. My Dad would let me go for a pee at half time by myself and this in itself was a journey of discovery to the Bob Bank bogs - my boys don't believe me when I tell them how horrific they were! 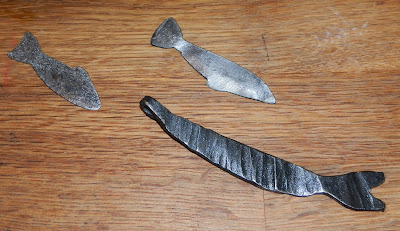 Posted by Dickie Straker at 09:35 No comments:

There are few in the world of angling who understandably see the otter as foe, but many a day riverside has been enhanced by the sighting of this creature. A true barometer of how well our rivers our doing now by comparison to the dark days of constant pollution seen in my childhood. I absolutely love them.

I have a slight obsession with cotton tea towels, so was overjoyed to find this lovely Richard Bawden example on our recent summer excursion to the North of Norfolk. Almost too nice to use!

Ballad Of The Three Spectres
As I went up by Ovillers
In mud and water cold to the knee,
There went three jeering, fleeing spectres,
That walked abreast and talked of me.

The first said, 'Here's a right brave soldier
That walks the dark unfearingly;
Soon he'll come back on a fine stretcher,
And laughing for a nice Blighty.'

The second, 'Read his face, old comrade,
No kind of lucky chance I see;
One day he'll freeze in mud to the marrow,
Then look his last on Picardie.'

Though bitter the word of these first twain
Curses the third spat venomously;
'He'll stay untouched till the war's last dawning
Then live one hour of agony.'

Liars the first two were. Behold me
At sloping arms by one - two - three;
Waiting the time I shall discover
Whether the third spake verity.
Ivor Gurney
Posted by Dickie Straker at 09:26 No comments:

It's been slightly chaotic at Straker Towers (ST) - a move, surgery on a gammy knee and much to pack / unpack, which box to move from A to B and then C and back again and much buried treasure found thought lost at sea! Phew!

A bit more vegetable tomfoolery - our lovely veggie box chap thought this would make us laugh in our weekly box and it did. I get that feeling often when looking at a tumbling weir pool!


Awaiting us at ST was a splendid tray of Sunset apples which had been harvested from the trees we are now most excited to have in our garden - what a lovely tray of treasure and they taste amazing. 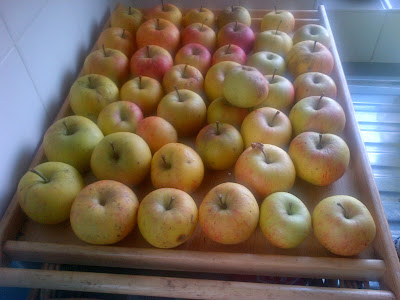 Posted by Dickie Straker at 10:29 No comments: