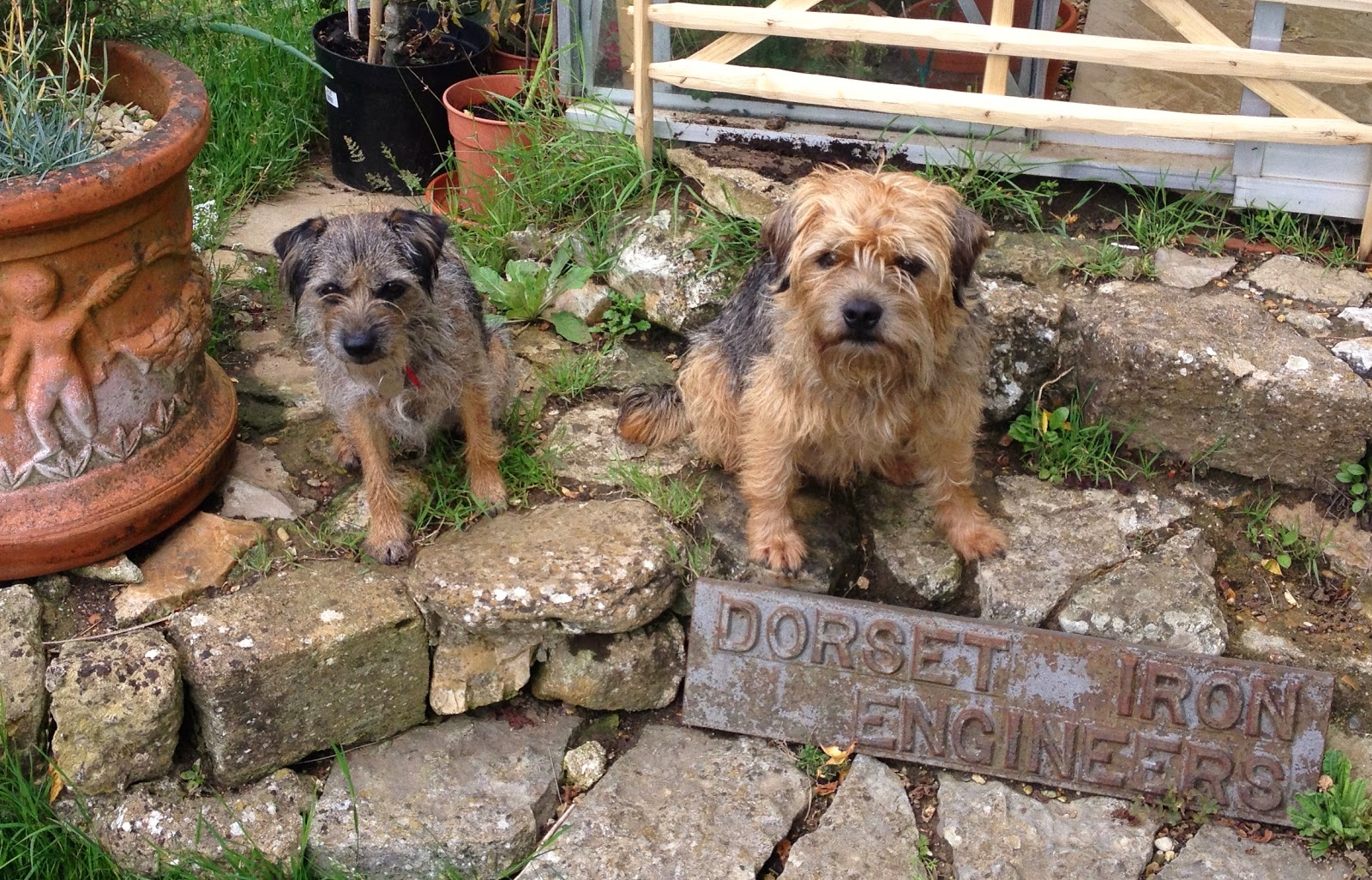 A rare moment of quiet and calm after a busy time eating windfalls and protecting the boundary from old ladies, postmen, folks legitimately going about their business, children on their way to the playground, anything sounding like a slammed car door, the squeak of a gate, old men with white sticks, cats and squirrels................it's hard work you know.

If you want a fix of all things Terrier I can do no more than direct you to the most wonderful blog of Mr John Richardson - The Two Terriers and recommend you purchase his stupendous art book: Being a Guide to the Jack Russell Terrier. One of the loveliest reads this last year!

It feels like autumn has come early this year – we had such a good spring after a mild and wet winter that it was not only the garden with its fruit and veg that got going. The wild harvest is also gearing up to be just as good. Berries and fruit for jamming, brewing and pickling with still enough for the wildlife.

I haven’t been shrooming, officially, yet this season, but that is just about to start. I have heard that all manner of wonderful specimens have already been found locally, which sort of makes me twitchy – In a “I need to get out now” sort of a way!

It’s also this time of year, well ordinarily in a few weeks, that I really get into Barbus barbus and I don’t just mean the delightful beer of the same name. The scent of autumn is a time that I associate with one of my favourite river fish species. Usually when it’s conker collecting time, not so soon after the August Bank Holiday.

I tend to start lighting the Kelly Kettle more at this time of year and it becomes even more of a companion on field trips and fishing jaunts. There were a few lovely old battered and much loved kettles being used at last weekend’s Stock Gaylard Oak Fair. I’m still on a bit of a high after this year’s 10th Anniversary event. It was so enjoyable. All things associated with wood – bodgers, coppicers, charcoal burners, shepherd hut makers, peg makers, brush makers, wood fire camping gear, boats, whittling knife makers – you know the sort of stuff. I’ll try and post a few more pictures of the event in the coming days. 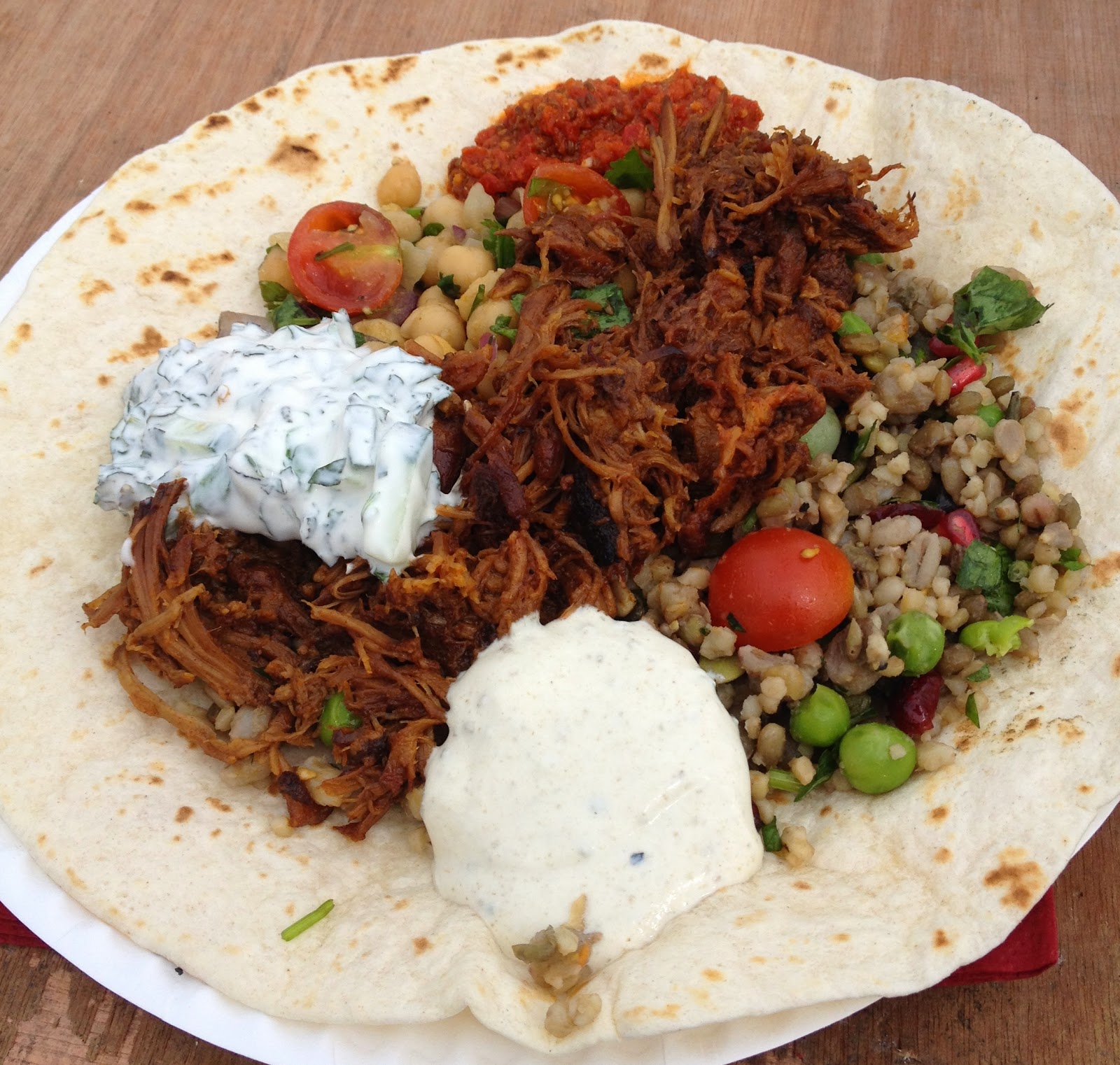 One of the highlights was our lunch! Salt marsh lamb tagine with a couscous and bulger wheat salad and various accompaniments – absolutely amazing and probably the finest show food I have ever had. Cooked by the Thoroughly Wild Meat Company and washed down with a pint of Piddle ale – doesn’t get much better than that. 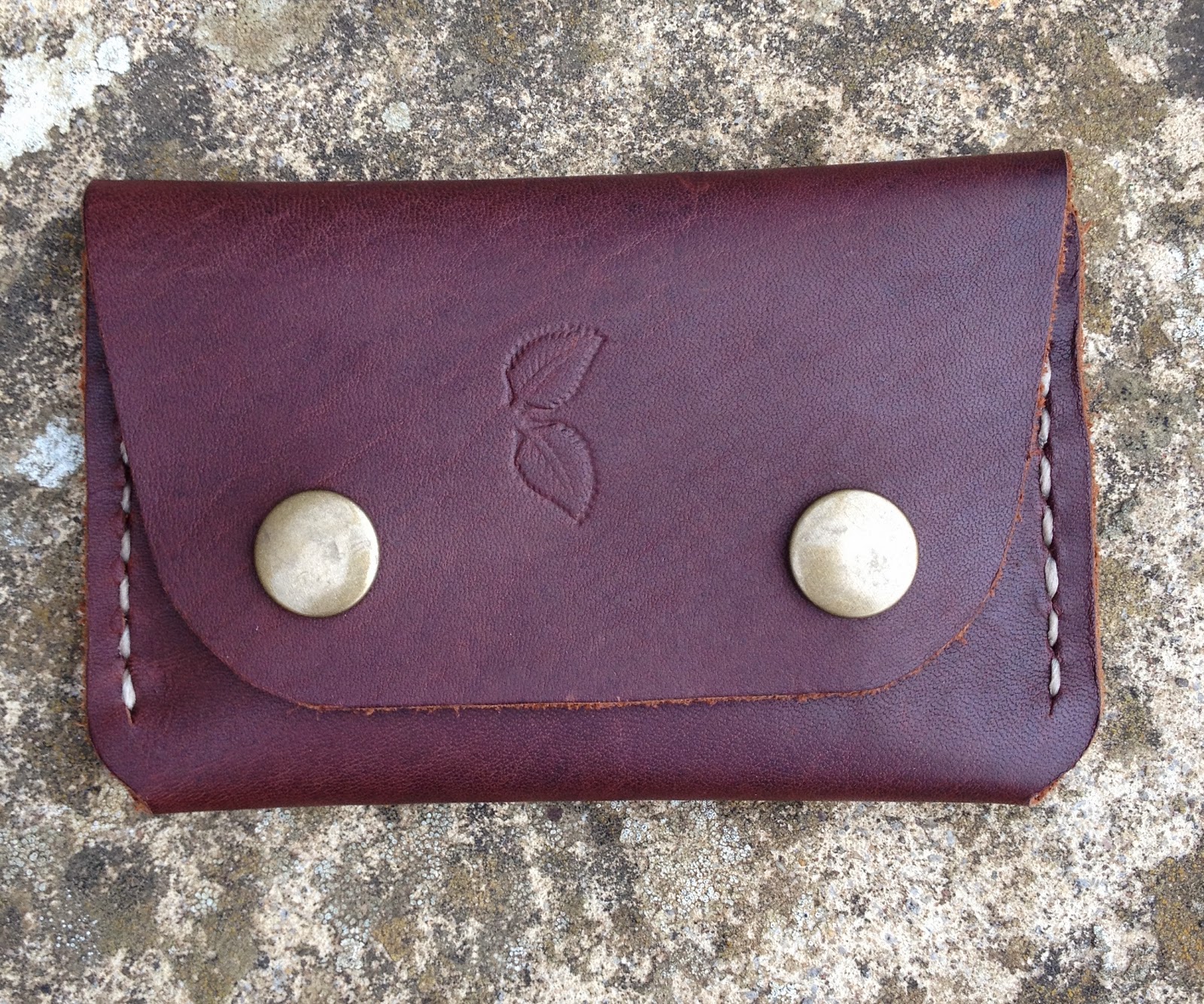 Finest purchase of the day has to be this wonderful new wallet hand made in the Purbecks by Embla Leather / Wood – I can’t begin to tell you how splendid it is. I wanted it as soon as I held it. I’ve never really used a wallet before but I cannot imagine one being as good as this. Not only in looks, but the way it feels and sits in the pocket. The time, effort and skill that Fiona de Wert put in to making it is something I can only marvel at. Handmade items such as this are the things to treasure as they have been created by such clever crafts people and have such a story to accompany them. 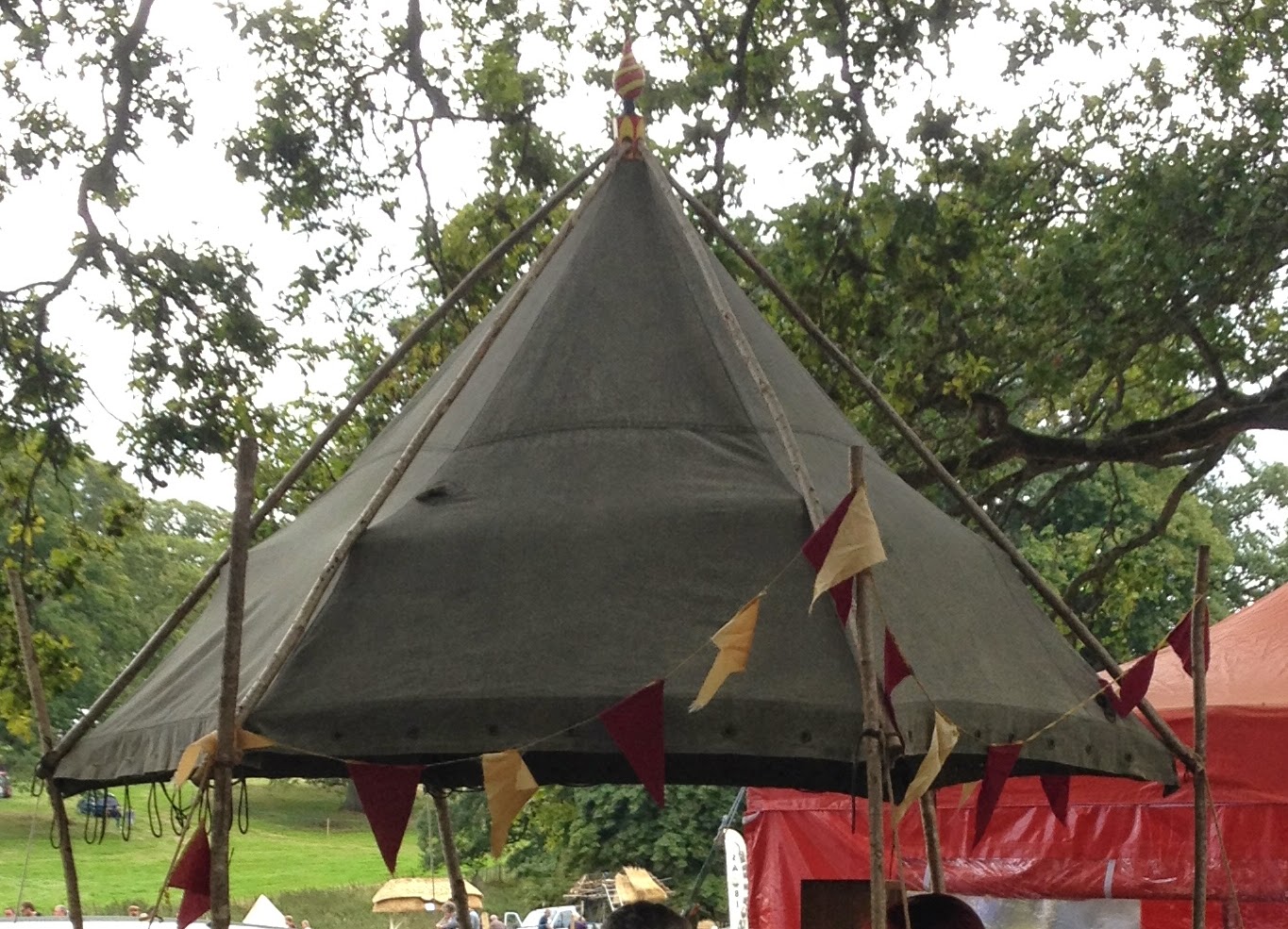 Tent of the day had to go to the rather splendid one belonging to ORD Knives – I was lucky enough to treat myself, last year, to the most wonderful Yew handled knife from ORD Knives. I absolutely love a good knife, not in a macho posturing sort of a way, but in an appreciative way. I have them for all sorts of uses and at the moment cannot find a specific use for my Yew handled knife other than fondling it, admiring it and doing the odd bit of whittling with it. Early days yet and it will become an heirloom. 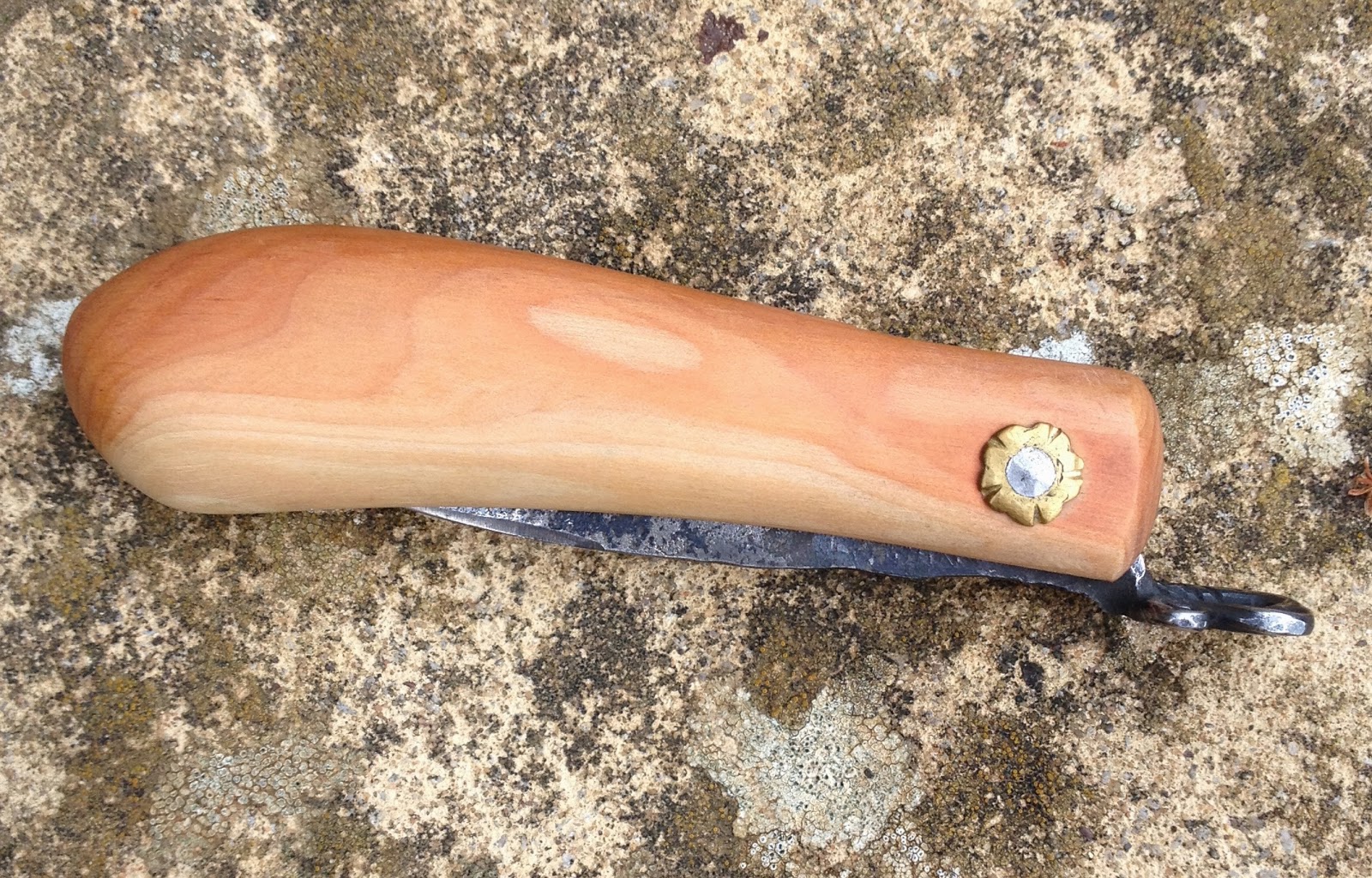 This handsome specimen has been standing proud for weeks now - a miracle no-one has knocked it down. I took great delight in finding it by the River Asker as I haven't seen it as much in recent years. 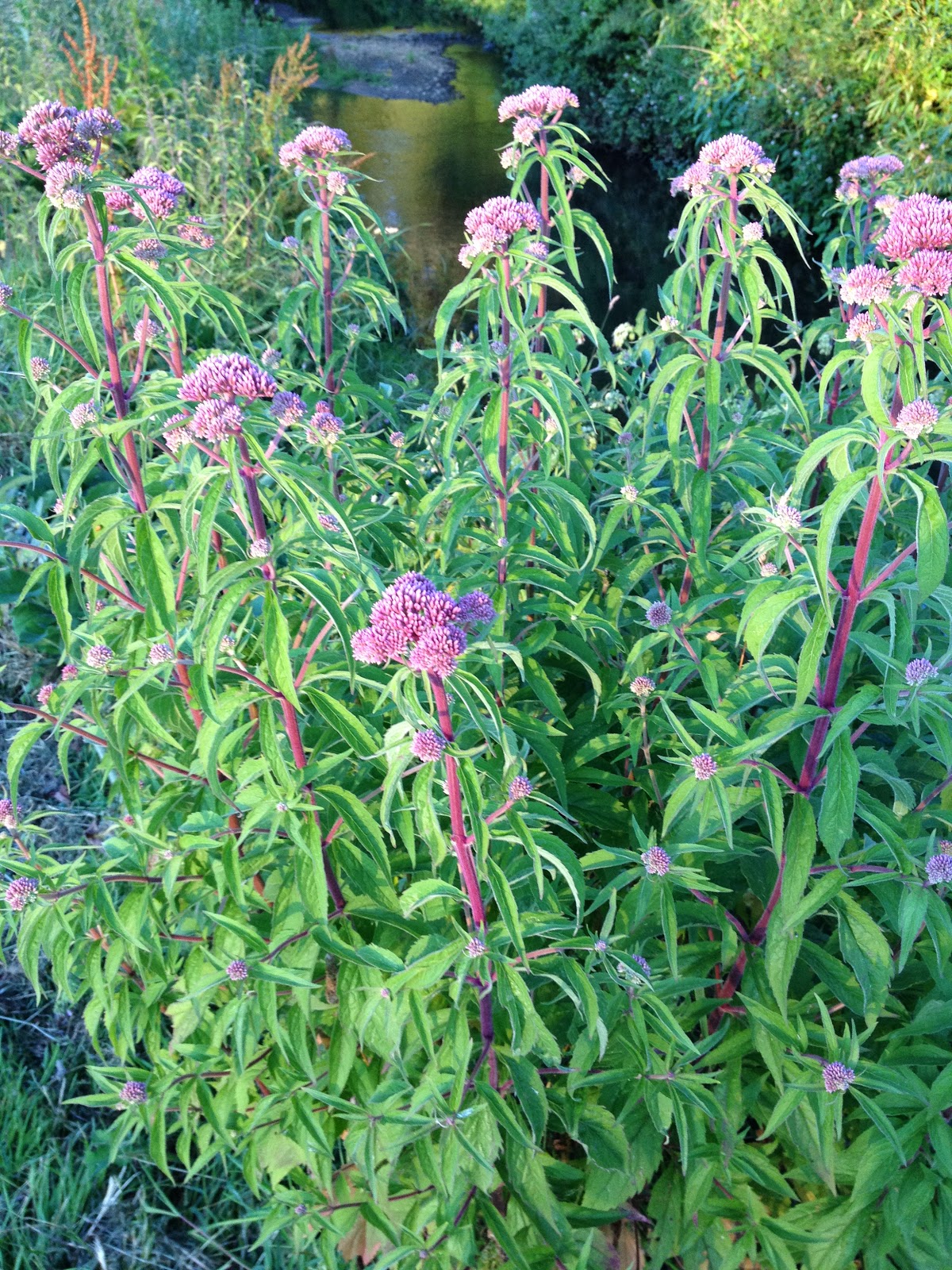 The butterflies like it and it is Hemp Agrimony, a robust perennial, that likes river banks, ditches and damp places. The plant is sometimes called 'St. John's Herb', and on account of the hempen-shaped leaves, it was also formerly called, in some districts, 'Holy Rope', being named after the rope with which the Saviour was bound. Country people used to lay the leaves on bread, thinking they prevented it from becoming mouldy. The bread at Straker Towers doesn't last long enough to gather mould, so we will leave the plant to enjoy the last rays of summer.
Posted by Dickie Straker at 07:41 No comments:

What a disaster. We returned from our jolly east to find everything in the garden going full pelt. Cucumbers the size of a mans arm, pumpkins just below footy size 5, tommies everywhere and tasting amazing, spuds still doing well .............but the fruit, what has happened? It's the dreaded brown rot in the plums that's what. 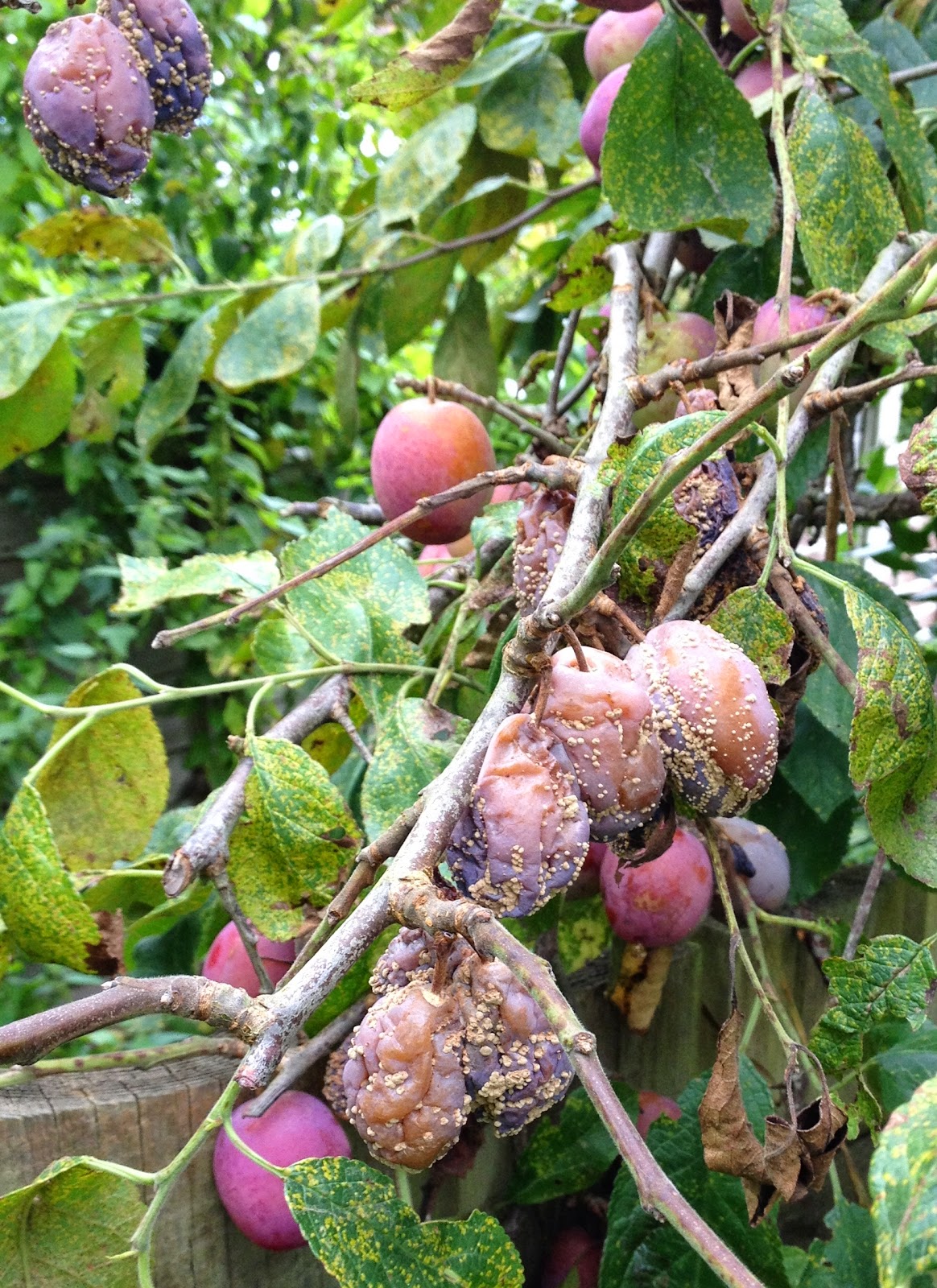 I was so looking forward to eating these as I remember seeing the tree overladen last year just before we moved in. The plan was for jam, chutney, crumble and the most heavenly dish of all - plum bread and butter pudding (give it a go - I love it cold too). They will all have to be picked and disposed of. Luckily the apples are not showing much in the way of rot, so we may just about get away with it. 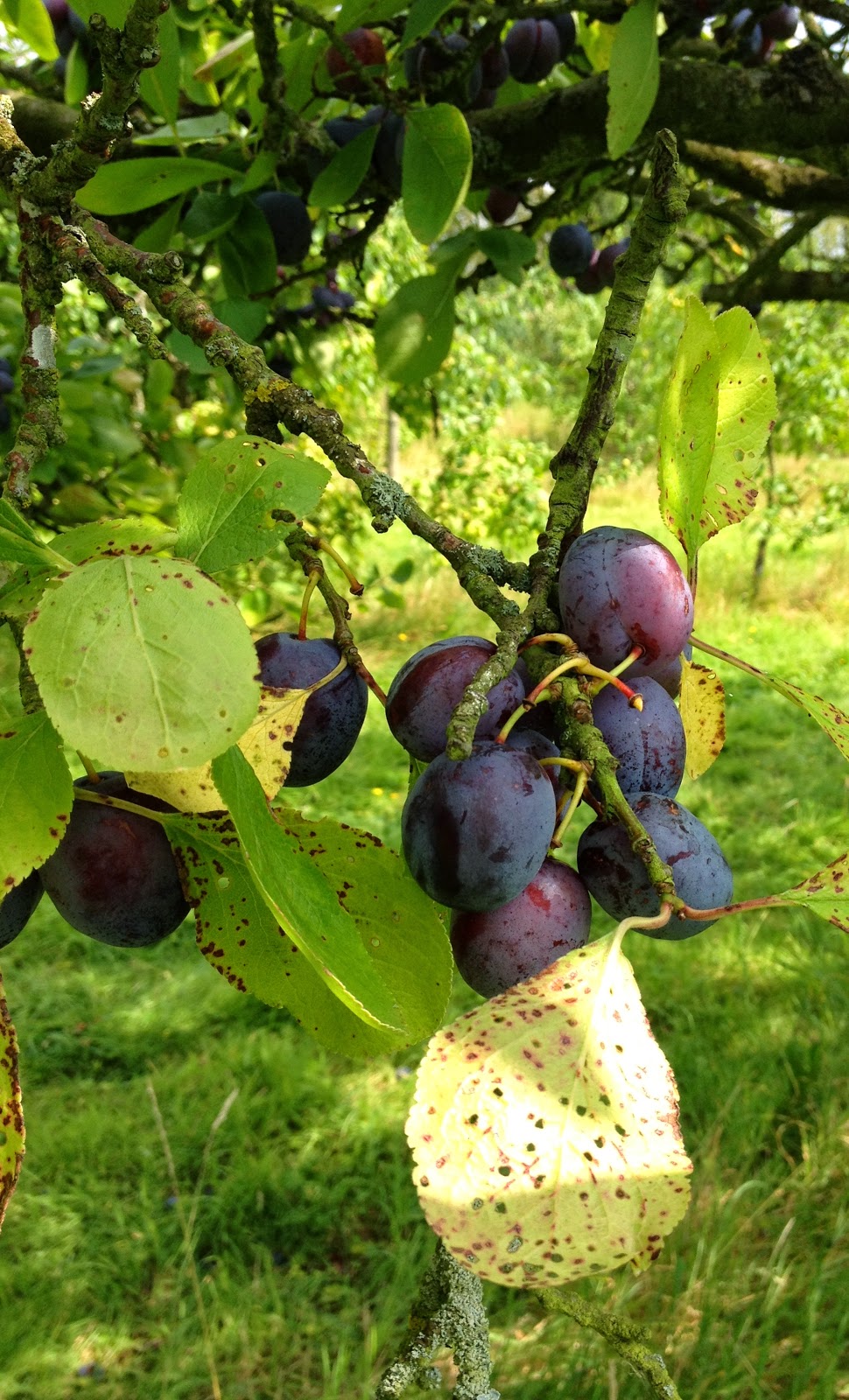 We did some splendid plum picking up near Burnham Market - Opal, Violetta, Sanctus Hubertus and one I have never heard of before, Blue Tit ( bottom right - this was not quite ready, but looked an incredible colour). 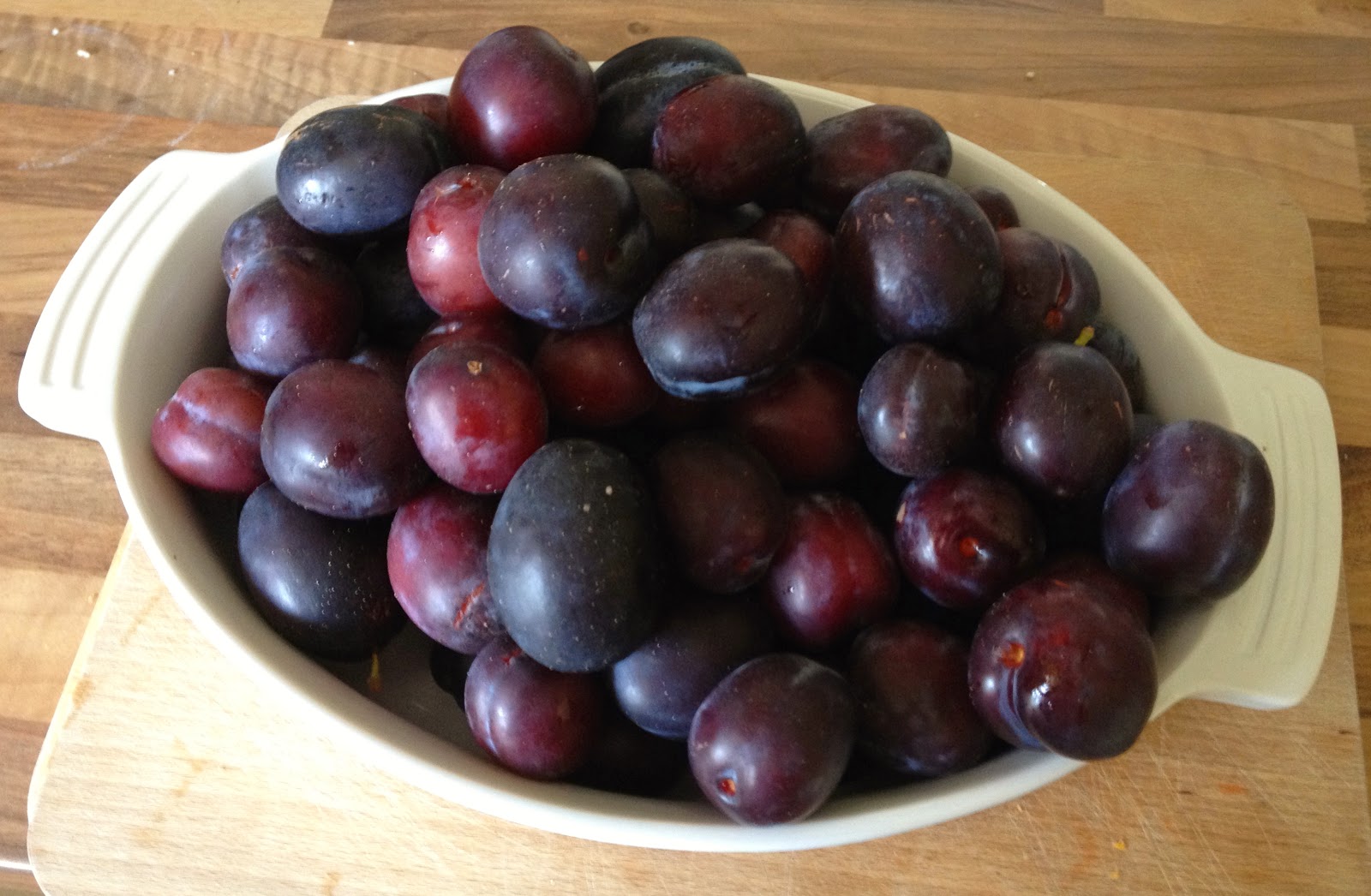 As if by magic a spot of rude fruit cropped up too - what a mighty fine rear! 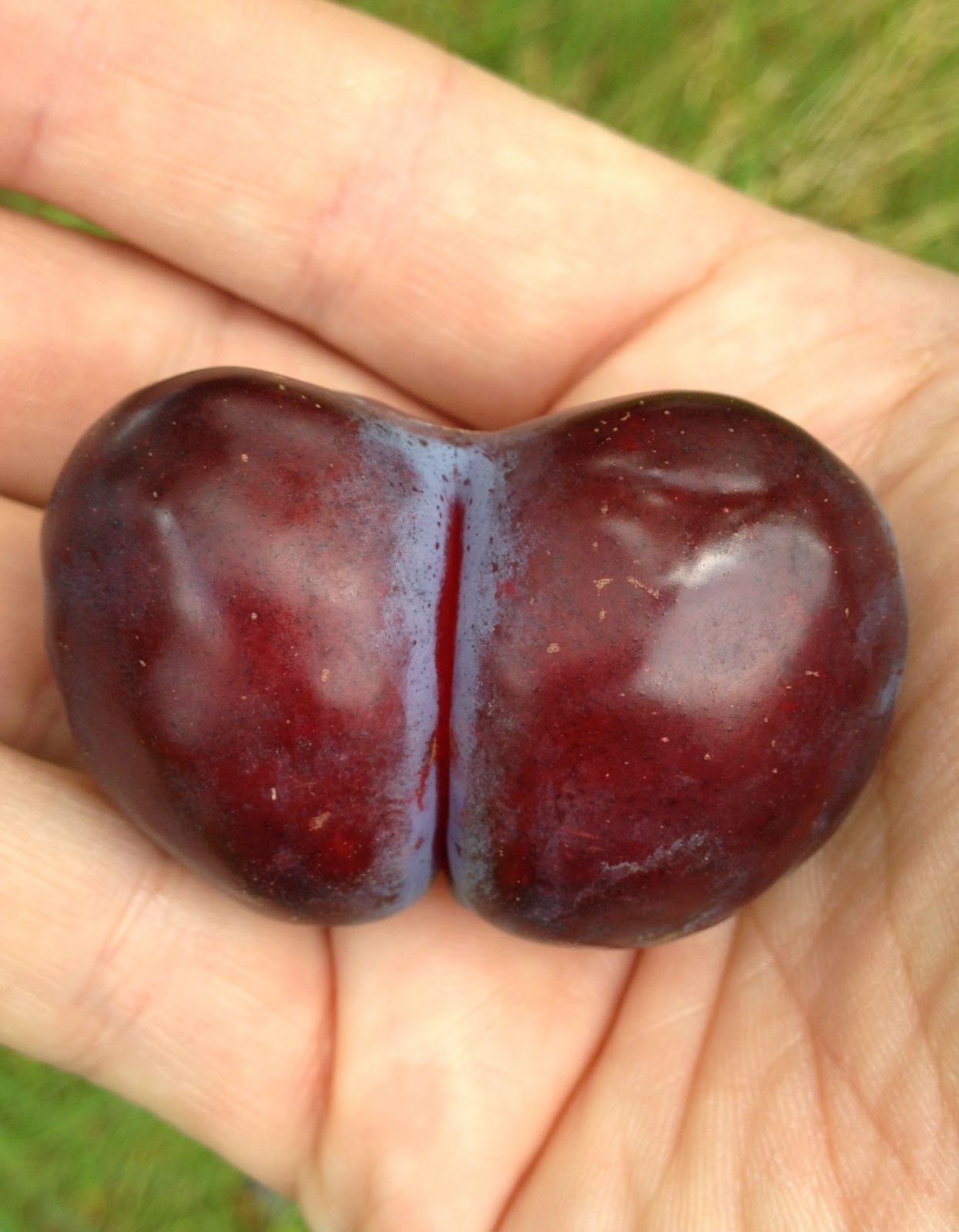 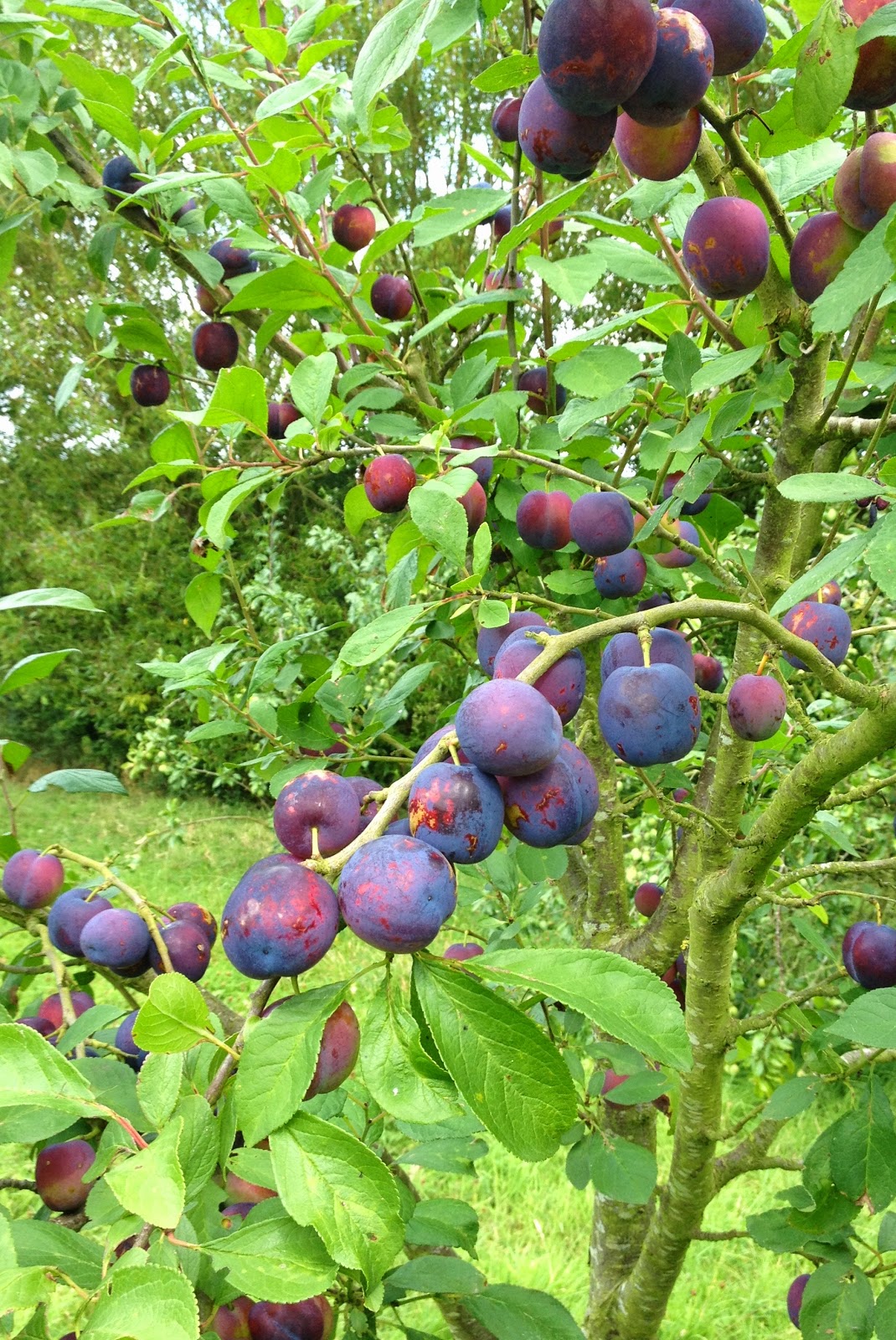 All is not lost as we will raid the family orchard up in Gloucestershire for our plum fix and we did bring back a big bag of Norfolk plums which are now sitting in the freezer.
Posted by Dickie Straker at 08:09 No comments: 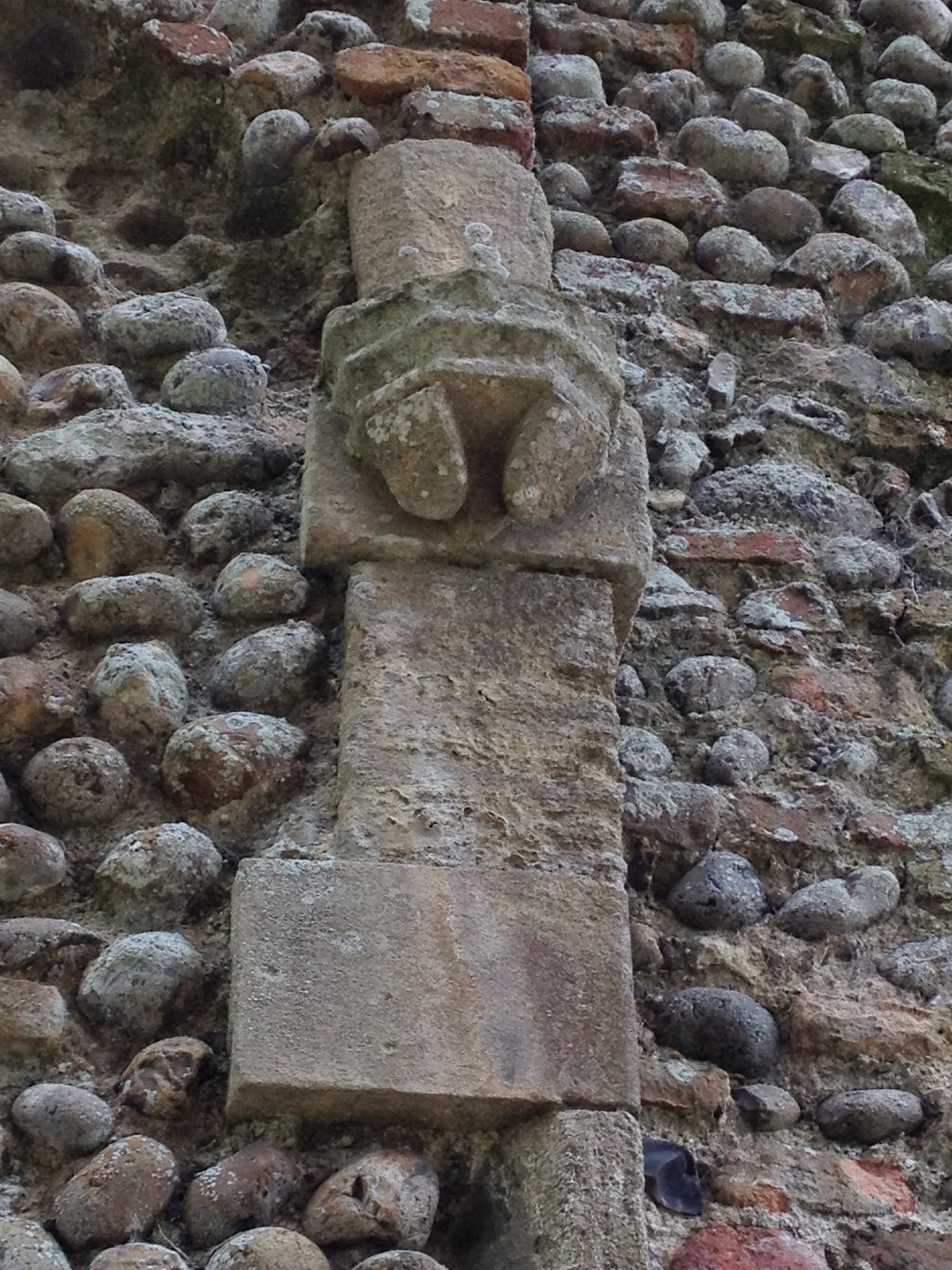 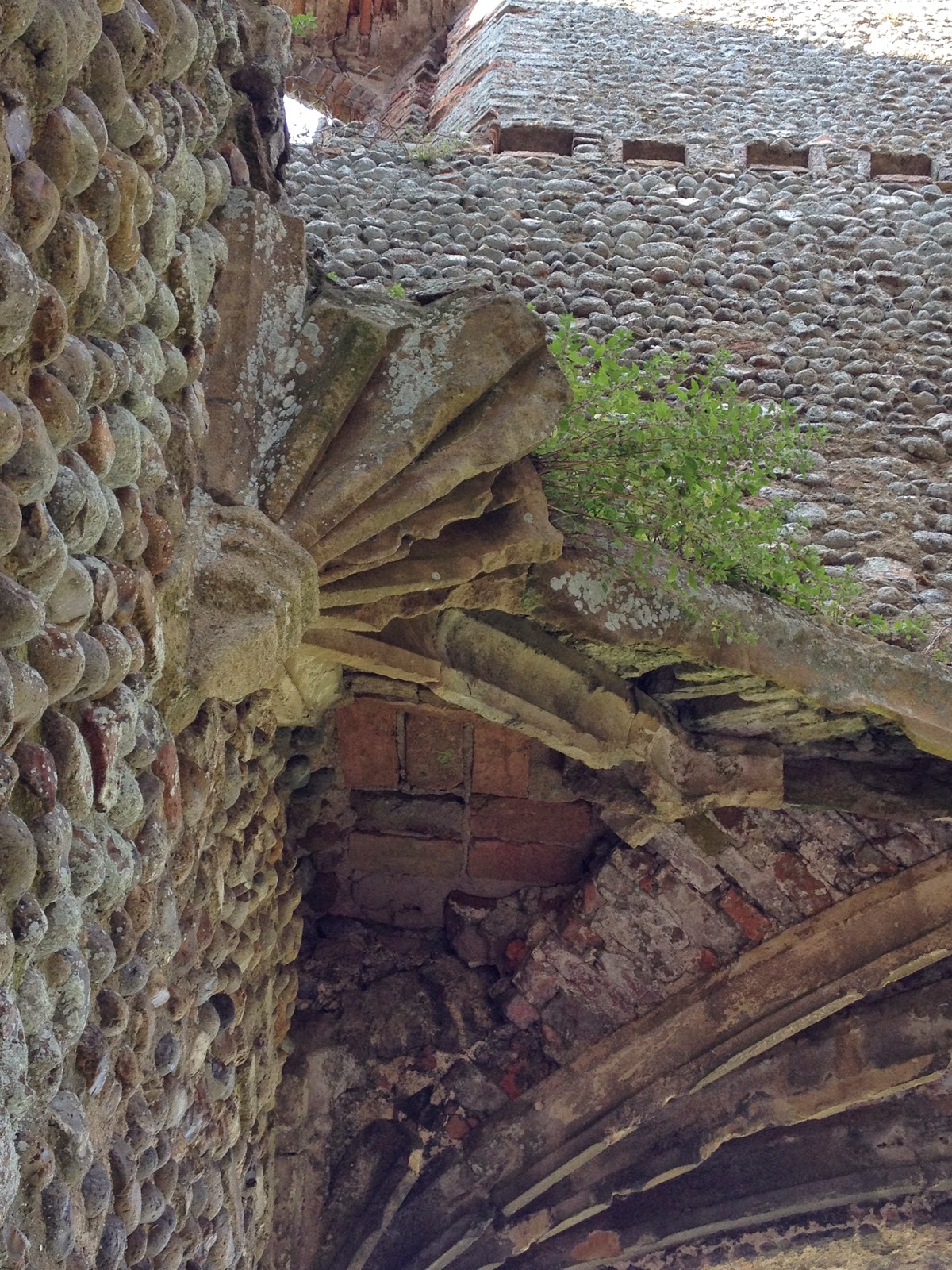 Beside these delightful ruins was a pond - a small pond where I had the feeling and hope that Crucian Carp would live. There were definitely fish there as I could see the odd dimple and a Kingfisher was hunting the margins. Crucian's are present in many of the small ponds around this site of antiquity, but I don't think English Heritage would be too keen on me whiling away an hour or two watching my float! An all together lovely spot. What a fireplace! It's the sort of chimney you could hide and lose things. No problem in sending the sweep up there. 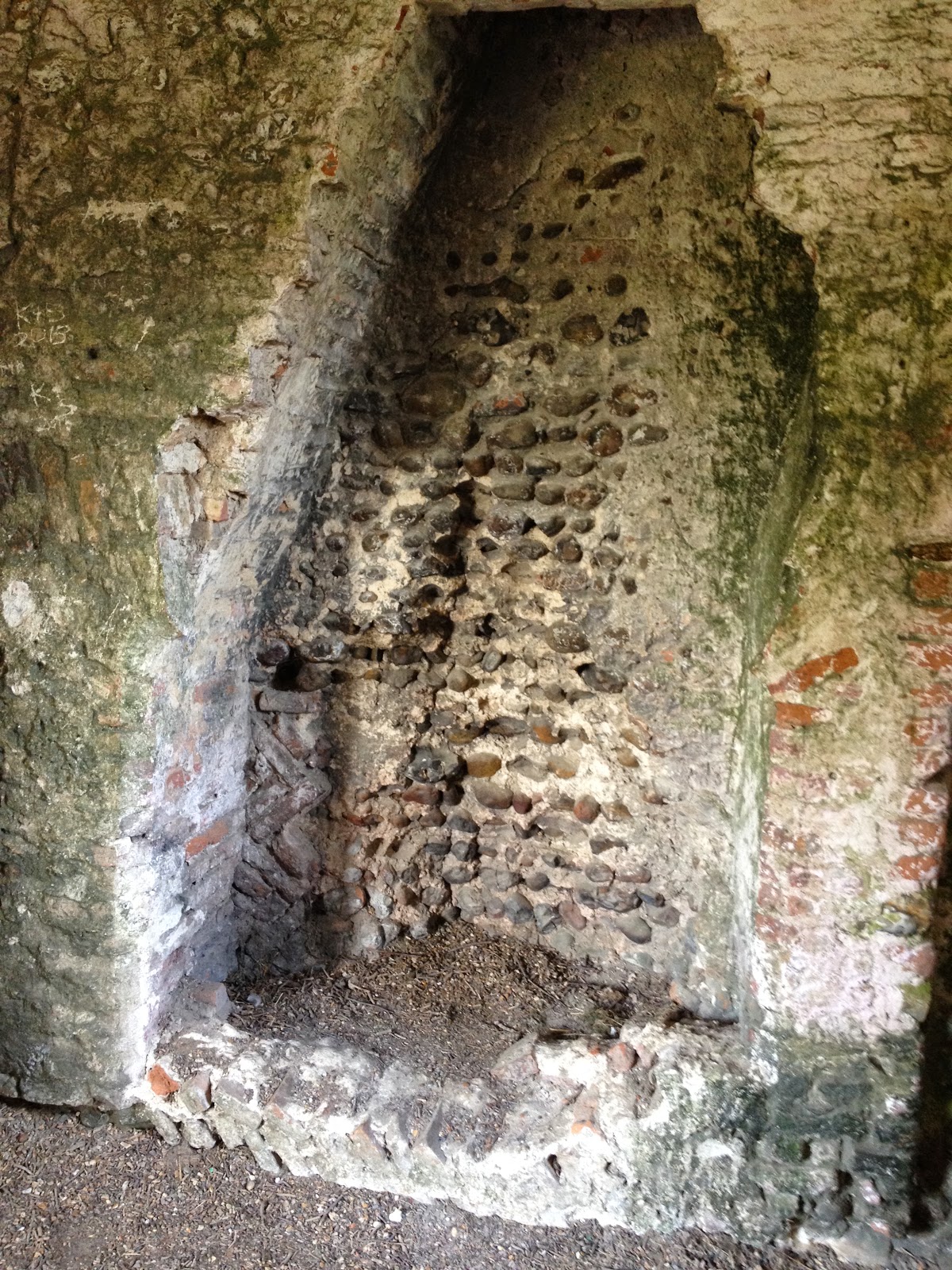 Posted by Dickie Straker at 08:10 No comments:

I have been a tad slack on the market finds front. I did manage to sneak in a little foraging whilst up in North Norfolk and here is what I came across - all for the cost of a few pints of ale. 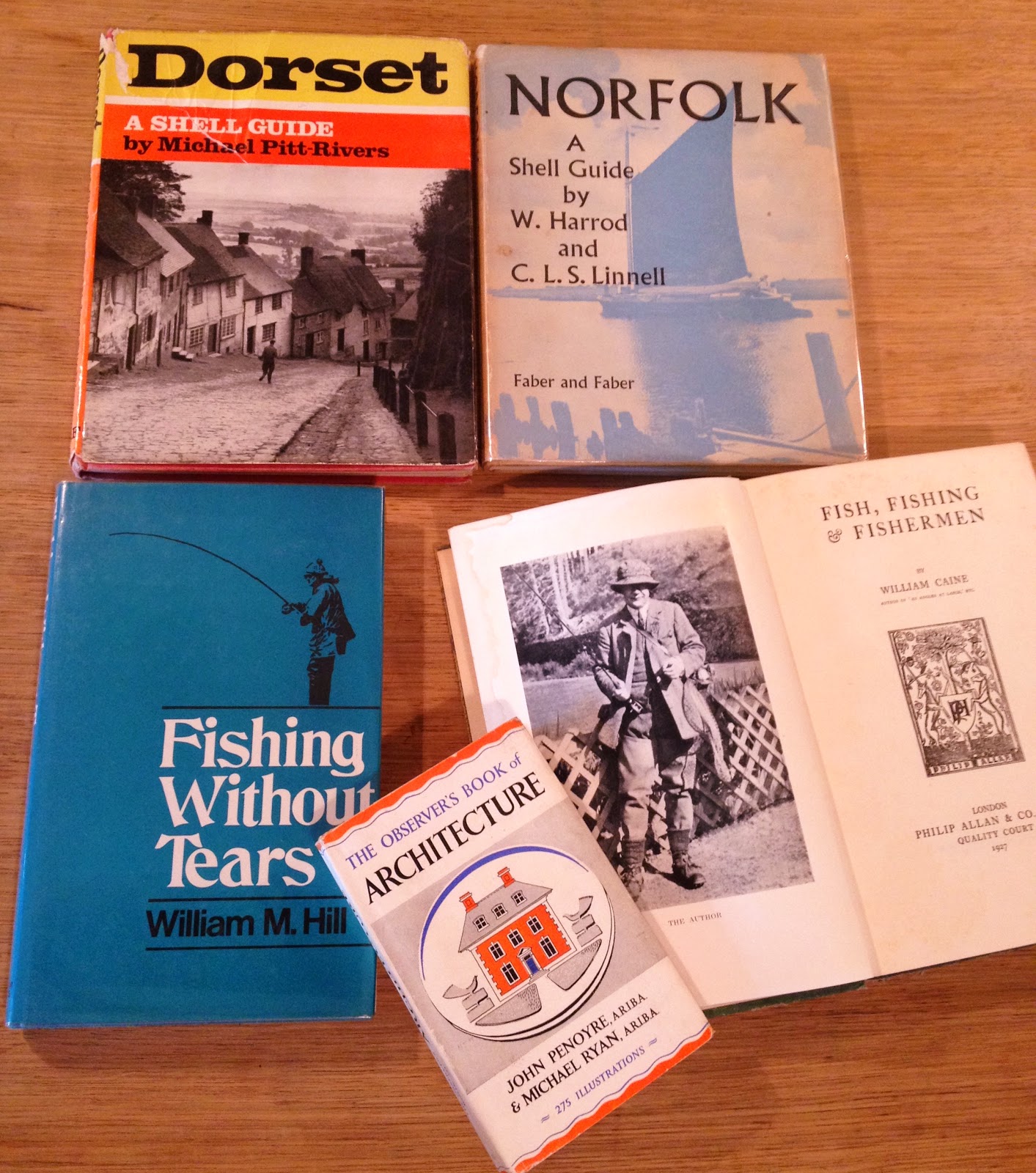 I didn't expect to find such a good copy of the Shell Guide to Dorset - some lovely Edwin Smith photography and a little bit of Nash. Shame it wasn't the super 1935 edition that Paul Nash put together, but I am sure that copy is lurking on a market stall somewhere!

Fish, Fishing and Fishermen by William Caine (Philip Allan 1927) has to be one of the loveliest angling books written. It is such a good read. I already have a well read copy, so this will go in the pile for presents or swapsies.
Posted by Dickie Straker at 07:56 3 comments:

A slice of nice

I had my first date slice from the rather good deli in Cley next the Sea about fifteen years ago. The Captain and I had a winter trip to search out, what was then, a rather unknown corner of the country for us and to also find the spot where BB painted a winter view of the famous Cley Towermill, marshes and River Glaven for me. It was one of the last paintings he ever did, but unbeknown to me at the time it was one of his "regular" pieces which he produced a few times a year for the market. I treasure it and we have been back every year since that first trip. Each year is like an adventure and we cannot imagine a time when we don't do it. 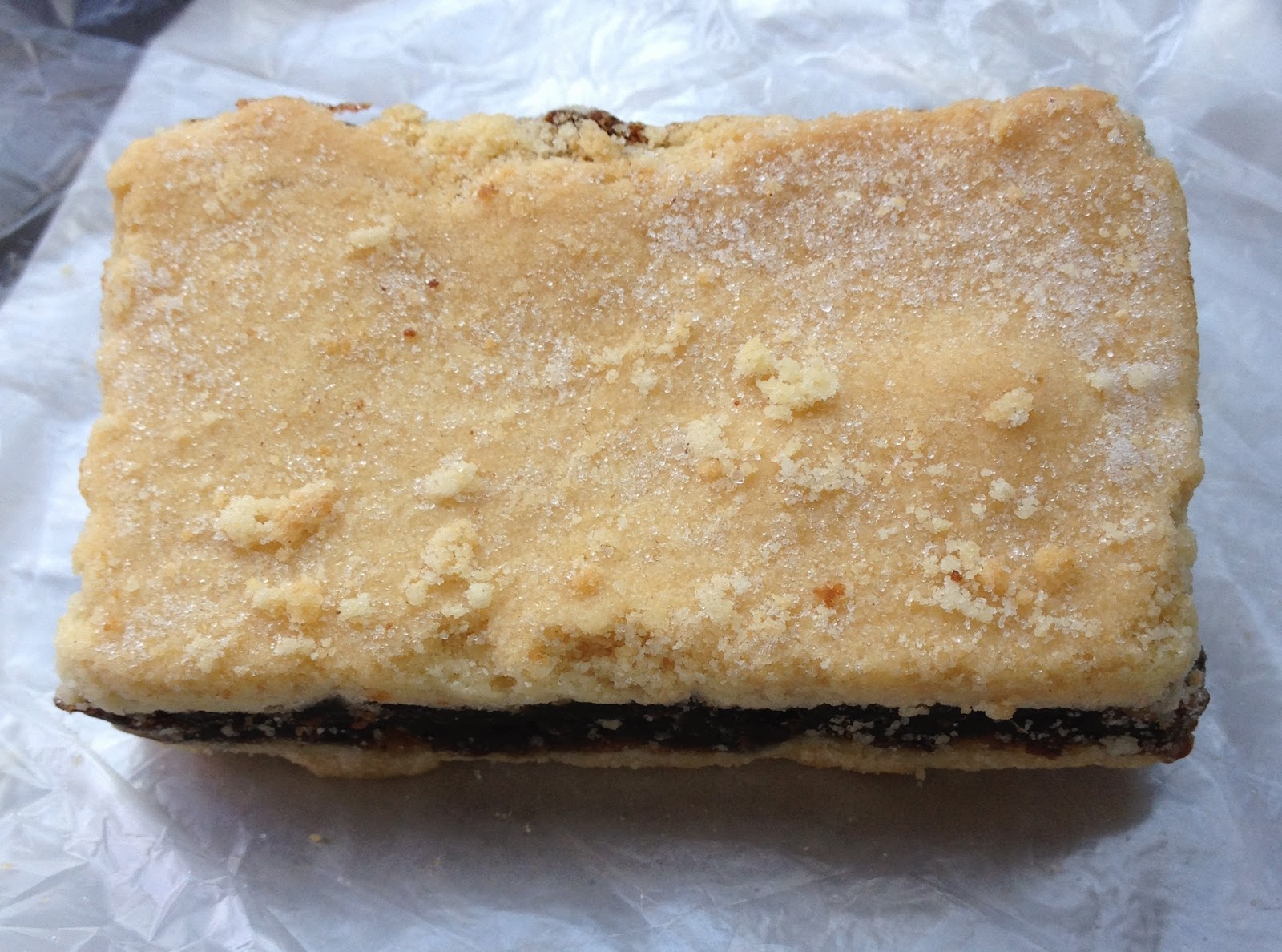 So, this humble date slice is riddled with memories for me - they all come flooding back when I bite into it (usually with a cup of tea). The good thing is The Captain and the nippers don't like them, so I don't end up losing half of it! Disappointingly there was a period when they stopped doing them, but they are well and truly back now. A friend brought me back a little box of them one year, just to keep me going you understand. How lovely is that!

Posted by Dickie Straker at 08:29 No comments:

Monarch of the Thames

It was this time last year that I found Henry Williamson's old farm on the North Norfolk coast at Stiffkey - he purchased Old Hall Farm for £2,250 in 1937 and, in my excitement, I had to write a letter to my good friend Roger Wyndham Barnes. Roger, or Styx to his friends in the Golden Scale Club, was the only person I knew who would understand and be as excited as I was.

He was, so much so he called me on my return and we spoke about this and Williamson for two hours as he was too poorly to write. He told me of the time he left a letter for Williamson at his writing hut at Georgeham in Devon. HW wasn't there, but replied soon after which delighted Styx as the card included HW's owl colophon. Styx is also the only person I know who had read all the books in HW's Chronicles of Ancient Sunlight series. 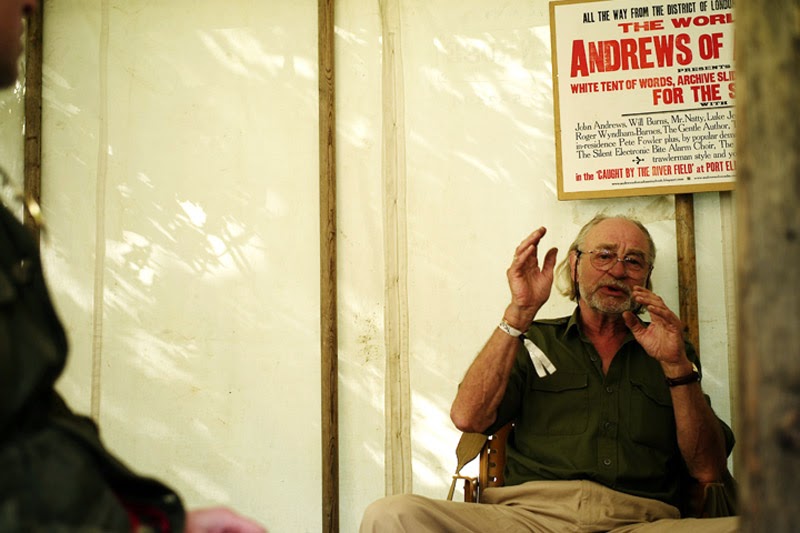 For the past few weeks I have been away again in that fine part of the world around Stiffkey - I mentioned it to Styx about eight or so weeks ago and said I would explore the saltings around the village and pick samphire where Williamson had no doubt trod. I thought of Styx as I did this - a quiet contemplative moment with the sounds and calls of wading birds and the breeze adding their own soundtrack to my thoughts. I made a mental note to give him a ring on my return.

It was around this time that my good friend lost his fight to a cruel illness and sadly passed away. It has been a difficult year with some lovely friends lost and I am sure they are all together again fishing more celestial waters. I miss them so much.

The pictures here are of Styx when he was on the bill at the 2012 Port Eliot Festival - I couldn't find who they belonged to, so many apologies in advance if you took them - they are lovely. A true brother of the angle, musician, boatman, lover of all things old and creaking and fine ale to name but a few. More than anything though, just a bloody good bloke. 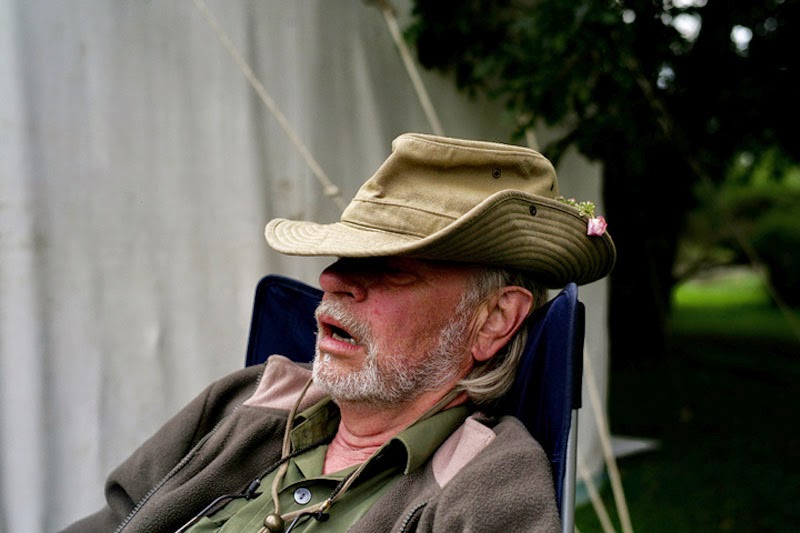 I will miss the nights in the hut drinking his Old & Filthy brew and the sound of his harmonica saying goodnight to the river and lake at last knockings. I will miss the chatter with Styx and dear friend Prof who also sadly passed away recently..................I hope you are both enjoying a pint of Old & Filthy together as you wait for the float to dip........have one for me my friends.