Sumer Is Icumen In

I loved the 20 CD collection of folk songs that Topic Records put out in the late 1990's - The Voice of the People. Another decade on and I note with interest that there is another tranche of releases.

Compiled by Dr Reg Hall, himself a fine musician, the original collection draws primarily on Topic's own output of some 120 albums, but also on previously unreleased private recordings and other long-unavailable commercial recordings. In the past, Topic put out albums by individual performers, but these 20 CD's are arranged thematically. There are three volumes of dance music, two of nautical songs, two concerning work (mainly rural), two of ballads, four of songs about love, courtship and sexual encounters, three of what might broadly be termed leisure pursuits (including drinking and hunting), and one each about exile, topical issues, and seasonal and ritual events. The one exception to the broadly thematic arrangement is Volume 11, My father's the king of the gypsies, which is devoted to recordings of English and Welsh travellers.

The one obvious omission from the last 20-CD Voice Of The People series in 1998 was the Copper Family, but happily they are here in force this time – Jim Copper is included with an outstanding You Seamen, Bold (on Good People, Take Warning), while the same collection features many of the traditional singers most dear to the revival, including Harry Cox, Jeannie Robertson, Fred Jordan and the fisherman who essentially inspired a 17-year-old Martin Carthy to devote his career to folk music, Sam Larner.


Talking of Jim Copper, I hope you enjoy this lovely version of 'Hard Times of Old England' - absolutely wonderful.
Posted by Dickie Straker at 20:35 No comments:

Email ThisBlogThis!Share to TwitterShare to FacebookShare to Pinterest
Labels: Music

The annual Swanage Railway Diesel Gala and Dorset Beer Festival is a permanent entry in my diary every year ........... I won't bore you with all the locomotive terminology and speak, I'll save that for another day, but needless to say this years bash was highly enjoyable.

The organisers were completely shot to pieces by the non arrival of the main stars of the show due to a loco failure up country. Being a West Country diesel hydraulic anorak I was most disappointed that Warship Class 42 Greyhound would not be attending.

The picture below (at Minehead on the West Somerset Railway) will give you an idea of what I am talking about. 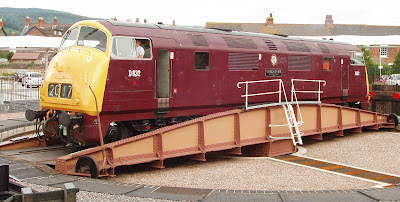 The Swanage Railway did a fantastic job in re-organising the whole timetable and are to be applauded for putting on another splendid gala .......... the beer was magnificent too! It's not often I put all my eggs in one basket, but this year I only sampled beer from one brewery. One, I am ashamed to say, I did not even know existed. 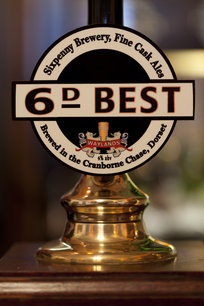 After sampling a pint of Sixpenny Brewery 6D Best Bitter that was it - I was hooked. All magnificent brews (I especially enjoyed the 6D Gold) and when I pass by the village, which I often do, I'll be calling in for some draught cask ale to enjoy at home. The Sixpenny Brewery certainly made up for the lack of a Warship. Cheers!
Posted by Dickie Straker at 20:49 No comments: 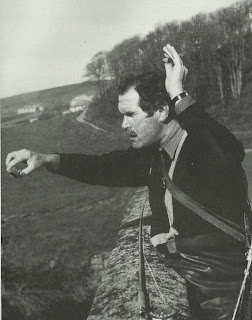 I often think of Ollie Kite at this time of year. I also make no apology for this longer than usual post in appreciation of the great man - there will be more postings in the future I'm sure. The joy that is the trout season brings with it many associations that I have with Ollie. There is certainly more to a fishing day than actually catching the fish -  A trout cooked on the bank for supper, picnic lunches, the abundance of flora and fauna and not too far away now my annual brewing of Kites Champagne. Enough, hopefully, to see me through the summer months.  I have no doubt I have followed his path with the thought of trout at the beginning of a fishing day - more often than not I toast the great man with a generous libation in the hope that he may bring me some good fortune on my travels with rod and line and also with thanks for the joy he has given me in print and film.

This lovely film has some rare footage of 'Kite's Country' (April 1964) - Fossiling with the Jennings Family. How splendid to see Ollie on one of my local beaches at Charmouth. We have never found any fossils as good as the Jennings family though! Superb soundtrack, just the ticket.

I have waxed lyrical all things Ollie through the most splendid Caught by the River site and you can read those ramblings and appreciations by others and myself here. Take a look at the recipe for Kites Champagne - this is in fact a variation, but one I know Ollie would appreciate.

I have often wondered what rod and reel Ollie favoured and as far as I can make out from footage and photo's his rod of choice was a fibreglass Milbro Trufly and the reel an Intrepid Rimfly - all fairly routine, but being the good infantryman that he was they were perfect for the job in hand. 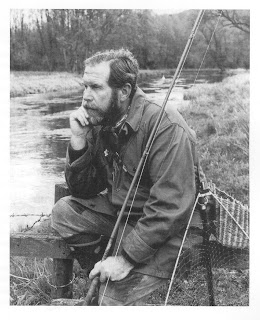 Back in the late 1980's I was fortunate to be able to write to Ted Channel who was not only a good friend of Ollie's, but filmed him on his adventures which were subsequently broadcast on Southern TV as weekly fifteen minute programmes. Ted kindly sent me what was remaining on video and I am really pleased to see that the majority of these are now available to watch on Youtube. Ted mentioned that another of Ollie's films was available, but not through him. It was the magnificent 28 minute film on Fawley Oil Refinery (1968). Ollie manages to even catch some trout in the private lake which is within the refinery grounds! This film was duly obtained rather amazingly from the film company who were still in operation at the time and I see that this is now available on DVD (in colour, my VHS copy is black & white) through the New Forest Centre. You can watch a 3 minute clip of Oliver Kite's Fawley here. 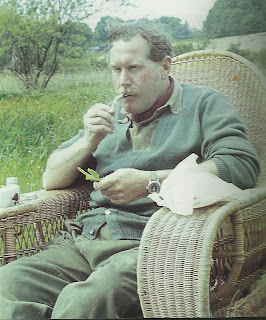 I was most fortunate recently to find locally a copy of his splendid 1963 book Nymph Fishing in Practice (Herbert Jenkins). Now, I already possess his books and didn't really need another edition but on inspecting this copy my heart missed a beat. When I saw it was signed by Ollie and below his signature the previous owners of the book (all good Wiltshire men within casting distance of the Upper Avon) I had to pinch myself. I still can't quite believe it now..............yachi dah Ollie!﻿

Posted by Dickie Straker at 21:03 No comments: